This is a slightly modified Brno ZKK602 action chambered in .375 H&H Magnum.  The stock is a Claro Walnut with a skeleton grip cap, Pachmayr Decelerator recoil pad, Schnabel forend tip with relief carving.  The cheek piece has a shadow line and the stock was fitted with inletted sling swivels.  The length of pull is 14.5 inches.  The checkering is in a point pattern at 22 lines per inch.

This is my wife, Barbara's, rifle.  It is based on a 1909 Argentine action with a Bastogne walnut stock.  This rifle has a steel grip cap and Pachmayr  Decelerator recoil pad.  It has a picture puzzle forend tip barrel band front sling swivel and inletted rear sling swivel.  IT also features a muzzle brake, floating barrel and a 13 inch length of pull.  This rifle is chambered in a wildcat she designed with the .366/358 Norma which was immediately named the .366 Barbie.  This cartridge will push 250 grain bullets well over 2700 feet per second with rather low pressures. 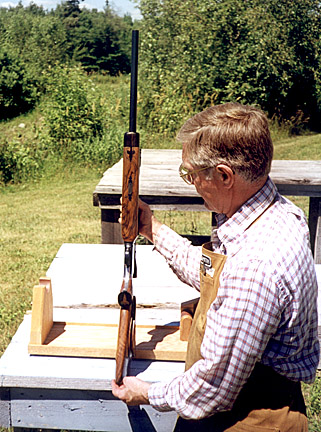 This little 310 Martini action is now a .22 Hornet with an English Walnut stock.  I made up the quarter rib and octagon scope rings to go with the half round / half octagon barrel.  This rifle is a takedown design which explains the forearm release.

Robert Hebert's .458 Lott.  It is based on a Browning action and the stock is Oregon Myrtle.  The sling swivels are inletted and the rifle is steel bedded with a floating barrel.  Double cross bolts were used to hold everything together as the rifle has an excessive amount of recoil.  The forend tip is ebony and since Rob is left-handed the stock has 1/2 inch of cast on. 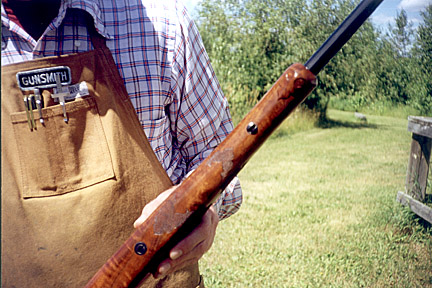 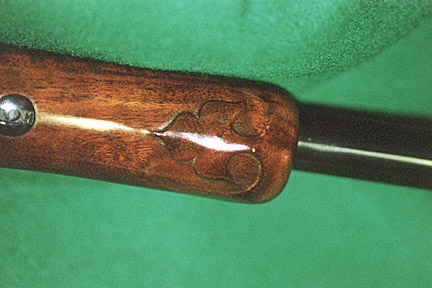 A G 33/40 Mauser action was the basis for this light little 7x57.  The stock is of Claro Walnut and it features a blind magazine.  The trigger guard was built from steel and has enough room for the Kiplinger single set trigger.  The stock has a Neidner checkered steel butt plate and the swivel studs are Pachmayr Quick Detachable.  There is a bit of relief carving on the Schnabel forend tip and side panels. 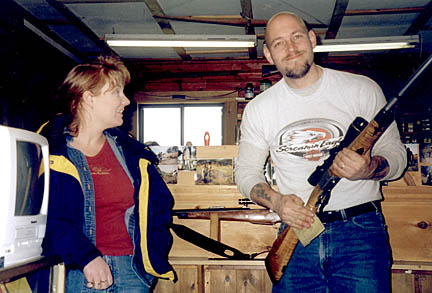 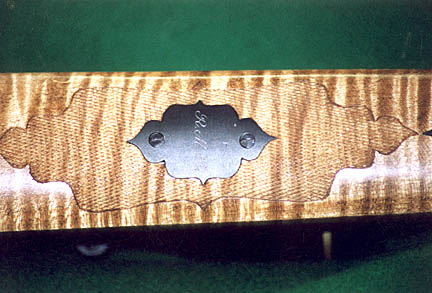 This is another of Robert Hebert's rifles.  This is a Ruger #1 chambered for the .366DGW cartridge.  This is a left-handed rifle and it has a muzzle brake and a Kiplinger single set trigger.  The side panels are relief carved and it has a picture puzzle forend tip.  One thing in particular we wanted to change is the big forearm screw on the #1 rifle.  It is usually unappealing so we made this custom steel plate to conceal it